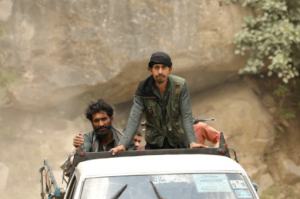 “Peace is not so much a political mandate as it is a shared state of consciousness that remains elevated and intact only to the degree that those who value it volunteer their existence as living examples of the same… Peace ends with the unraveling of individual hope and the emergence of the will to worship violence as a healer of private and social disease.” ~ Aberjhani, The American Poet Who Went Home Again

Did you witness the American military planes taking off from Afghanistan with people hanging onto the plane for dear life, risking everything to flee the Taliban and evil that swarms them in their land? The violence in that region is heartbreaking and beyond comprehension. It’s heartwrenching to watch people oppressed, abused, tortured, enslaved, and even murdered for not submitting to the will of the evil regime. As outsiders witnessing this kind of pain and suffering of the Afghanistan people in the news, what are we to do? It should cause anyone with the Spirit of God living inside them to feel powerless and moved to action simultaneously.

The British historian Lord Acton is famous for this quote “Absolute Power Corrupts Absolutely.” We have witnessed the destruction of individuals, nations, regimes, and empires throughout history as they strive for a position of power. This self-centered pursuit for power will eventually wipe out the entire existence of humanity.

Throughout history, every empire or regime that ever existed has fallen at some point in time. The average life expectancy of an empire is 250 years. Do you know how old America is at this moment? America is 245 years old, only five years away from the average demise of all empires throughout history. Individuals, groups, and entire nations strive to gain power, resources, and control at all costs, justifying and rationalizing their behavior along the way. As a result, people are oppressed, enslaved, neglected, abused, tortured, and often killed for such pursuits.

We are witnessing in Afganistan what has happened throughout history as far back as historical data exists. The indigenous people of the Americas, the people Columbus called “the Indians,” suffered the same kind of oppression, enslavement, neglect, abuse, torture, and death at the hands of the early colonizers and in the name of God. The European colonizers did the same thing with the people of Africa (in the name of God); they overtook them with brute force and creative schemes, and what happened next? The colonizers stole millions of people from their country, turned them into commodities, and sold them to the highest bidder. These people were enslaved, neglected, abused, tortured, and often killed, and all for what? Power, Glory, and Prestige!

There is nothing new in our culture today that hasn’t been going on since the beginning of creation. The names, zip codes, and dates are different, but the story is always the same. People with means strive for power, glory, and prestige. When someone is on top, it means somebody else is on the bottom. For every winner, there must be a loser in this experience referred to as “The Game of Life.” The evolutionists refer to this behavior as “The Laws of Nature” or, if you wish, “Survival of the Fittest.”

Here is the great delusion of every human being that has ever lived, “if we had the power, things would be different.” “If we were in control, things would change.” The oppressed, marginalized, and minority parties have made these declarations throughout history. But, what always happens when the people on the bottom somehow make their way to the top? They become corrupted by the power; why? Absolute power corrupts absolutely.

If it had been the African American or Native American people with the power, people would have suffered the same enslavement, neglect, systematic racism, torture, abuse of all kinds, and often death. The root of the problem is sin; it’s not the color of your skin or your place of origin that’s the problem. Whoever has the majority of resources, e.g., raw materials, intellectual property, military means, wealth, food, water, and allies, is in a position of power and desires to remain in control at any cost. In America, that is the white majority, at least for now.

By 2050, white people will no longer be the majority in the United States of America. One out of three people will be Hispanic or people of color. This reality scares the daylights out of most white people if we are honest. Does this help explain why white people in power are jockeying for position and attempting to seal our borders trying to prevent this shift of power from happening, and why people of color protest the current systems in place that help keep white people in power? Well, I will let you be the judge. If you apply Lord Acton’s theory, it doesn’t matter the skin color of who’s in power; it is simply a fact that absolute power corrupts the soul of those in power.

What is white people’s biggest fear? Fear of the unknown? Fear of losing control? What might people of color subject white people to when (not if) they obtain the power by becoming the majority? What does history say? What does Lord Acton predict? More importantly, what does the Bible say? Again, the problem isn’t a matter of skin color; it’s a heart problem. The heart of the problem is a problem with the heart. The Bible has revealed this truth from the very beginning of creation. Yet, we turn our eyes away from the best-selling book of all time.

If you claim there is no God, then life is simply the survival of the fittest. Whoever possesses the power controls everything and makes all the rules for everyone else. If God does exist, which I argue that He does exist, how would it change things if humanity put God at the center of human existence, and humankind turned their will lives over to the care of God? Be honest with yourself.

If God exists, what would God have humans do so that all of humanity survives and thrives? God reveals this truth and grants us clear-cut directions in scripture for how to live, e.g., by the love commandment: “Love God, love others as yourself, and help change the world.”

If humankind lived by this commandment alone, there would be no more killing, no more war, no more winners vs. losers, or us vs. them. We would see an end to the political divide; the end of people starving or going thirsty and the end of homelessness. There would be peace and harmony in the world at last. Are you listening? This news is not new information; God revealed this truth to humankind from the beginning. There is a better way; it’s called “God’s Way!”

The Israelites had no other leader but God until they decided they no longer wanted to follow God. Instead, they wanted an earthly king like all the other nations. God honored their wishes, warned them what would happen under an earthly king, and as the saying goes, “the rest is history.” Now apply that to what has happened in the world ever since, and you can clearly understand why the world is in disarray and why “absolute power corrupts absolutely.”

The cries from Afghanistan are heart-wrenching and should break the hearts of every human being throughout the world. The brave men and women who risked their lives to liberate these people shall never go unnoticed. Tragically, so many brave men and women had to risk or lose their lives for Afghanistan’s freedom, literally for decades, only to watch the country fall to the Taliban in literally hours. One veteran stated, “at least the Afghanistan people experienced some level of freedom for a few decades.” It seems the Afghanistan occupation wasn’t all for nothing, but it sure appears and feels that way.

God promised that one day the kingdom of God would fully reign on earth as in heaven. Until that day, as believers, who claim to believe in a God of love and peace, we need to press on helping usher in the kingdom of God until God intervenes and completes the process Himself. Our job is to be peacemakers and provide love and service to all of God’s kids, which means everyone, with no exceptions.

Just think how different the world would be if we all adopted God’s blueprint for living life? One day, salvation will come to earth and restore all creation to its original intent, and paradise will prevail on earth as in heaven. We may not see it in our earthly life, but we will witness it in the afterlife. It’s an experience you do not want to miss. So make sure you are living a God-centered life because you never know when the old earth will perish and when God will restore the new earth.

God of love, our hearts are troubled by the cries of Afghanistan. We feel as helpless as those caught in the snare of evil. Would You please intervene and help those in trouble and fearing for their lives. We pray for comfort and protection for all those in harm’s way. We pray for the hearts of the Taliban and all those who align themselves with wickedness. God, please convict us, and grant us the willingness and clear direction for serving the people of Afghanistan in this time of unrest, pain, and suffering. In Your Spirit and Name, we pray these things. May Your will not ours always materialize, now and forever. Amen.

Photo by Sohaib Ghyasi on Unsplash